Light is a type of "electromagnetic wave". "Electromagnetic waves" follow a standard of "wavelength" and starting from those of long wavelength, can be divided into radio waves, infra-red rays, visible rays, ultra-violet rays, X-rays, and gamma rays.

As wavelengths of light hit an object, wavelengths that are reflected without being absorbed by the object are taken in by the human eye (retina). When this occurs, we recognize these wavelengths as the "color" of the object. The refractive index differs depending on the wavelength, therefore light is split. As a result, we are able to recognize a wide variety of "colors". For example, an apple (receiving day-light, which includes specific light rays that enable humans to see the color red,) reflects red wavelengths of light (600 to 700 nm) and absorbs all other wavelengths of light. *Black objects absorb all light and thus appear black.

What are Visible Rays?

This is where regular lights (lamps, etc.) and lasers differ.
Lasers emit beams of light with high directivity, which means that the component light waves travel together in a straight line with almost no spreading apart. Ordinary light sources emit light waves that spread apart in all directions. The light waves in a laser beam are all the same color (a property known as monochromaticity). Ordinary light (such as the light from a fluorescent bulb) is generally a mixture of several colors that combine and appear white as a result. As the light waves in a laser beam travel, they oscillate with their peaks and troughs in perfect synchronization, a characteristic known as coherence. When two laser beams are superimposed on each other, the peaks and troughs of the light waves in each beam neatly reinforce each other to generate an interference pattern.

The Origin of the Word Laser

The word LASER is an acronym, which stands for “Light Amplification by Stimulated Emission of Radiation”.

When atoms (molecules) absorb external energy, they move from a low level (low energy state) to a high level (high energy state). This state is described as an excited state.
This excited state is one that is unstable and in this state, the atoms will immediately attempt to return to a low energy state. This is called transition.
When this occurs, light that is equivalent to the energy difference is emitted. This phenomenon is called natural emission. The emitted light collides with other atoms that are in a similar excited state, inducing transition in the same manner. This light that has been induced to emission is called stimulated emission.

Can be broadly divided into 3 types: Solid-state, Gas, and Liquid

*The optimal laser will differ depending on the desired processing application.

A CO2 laser is used mainly for machining and marking applications.
CO2 lasers emit invisible infrared beams with a wavelength of 10.6 μm. N2 gas serves to increase the energy level of CO2, and He gas serves to stabilize the CO2 energy level.

A YAG laser is used for general-purpose marking applications such as marking on plastic and metal workpieces, as well as for machining applications.
YAG lasers emit invisible near-infrared beams with a wavelength of 1064 nm.

YAG is a solid that provides a crystalline structure of Y (yttrium) A (aluminum) G (garnet). Through doping of a light-emitting element, in this case Nd (neodymium), the YAG crystal will enter the excitation state via absorption of light from a Laser Diode.

A YVO4 laser is used for ultra-fine marking and machining applications.
YVO4 lasers emit invisible near-infrared beams with a wavelength of 1064 nm, like the YAG laser.

YVO4 is a solid that provides a crystalline structure of Y (yttrium) V (vanadium) O4 (oxide), or Y (yttrium) VO4 (vanadate). Through doping of a light-emitting element, in this case Nd (neodymium), the YAG crystal will enter the excitation state via absorption of light from a Laser Diode.

Characteristics for each wavelength

CO2 lasers have a wavelength that is 10 times longer than a YAG, YVO4 or Fiber laser. This is the longest wavelength among widely used industrial lasers. CO2 lasers, as the name implies generates the laser medium through stimulation of CO2 gas. 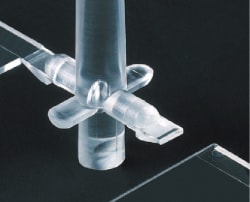 The IR wavelength which is an abbreviation for Infrared Ray is the most versatile wavelength of light for laser processing. As the name implies, IR is the spectrums outside of red, which are invisible to human eyes (i.e. longer than 780 nm). Second Harmonic Generation (SHG) uses a wavelength that is half of the typical 1064 nm wavelength. 532 nm falls into the visible spectrum and is green in color. This wavelength is produced by transmitting a 1064 nm wavelength through a nonlinear crystal that reduces the wavelength by half. A YVO4 medium is normally used because the characteristics of the beam are well suited for intricate processing. 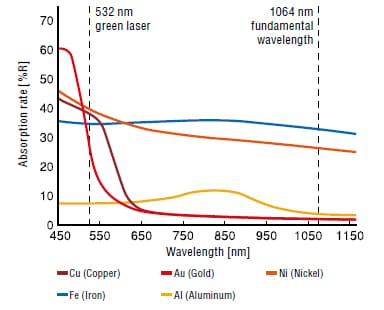 This explains the fundamentals up until a laser is oscillated.

As external light is injected, the electrons within the atoms absorb the light and go from the lowest state of energy (ground state) to a state of high energy. As the energy increases, the electrons transfer from normal orbits to exterior orbits. This state of increasing energy is called "Excitation".

Excited electrons, in response to the amount of energy absorbed, rise in energy levels. Electrons that have been heightened with energy try to stabilize as a certain relaxation period passes, emitting energy in an attempt to return to a lower energy state. At this time, the emitted energy is emitted with light of the same energy.
This phenomenon is called "natural emission".

As seen in the illustration below, electrons exist in a high-energy state and when the energy held by these electrons is injected with light of the same energy, it will emit light of exactly the same energy, phase, and movement direction.
In other words, what was a single photon during injection, produces a phenomenon where it becomes two photons. This is called "Stimulated Emission". Light produced from stimulated emission possess uniform energy, phases, and movement direction. Thus, producing a multitude of light with stimulated emission will allow for the creation of strong light with those three elements set uniformly.
Laser light is created by amplifying injected light using the phenomenon of stimulated emission.
Due to this, it possesses the characteristics of being (1) monochromatic (All light energy is equal), (2) coherent (uniform phases), and
(3) high-directional (uniform movement direction).

In order to oscillate a laser beam using natural emission, it is necessary to increase the density of electrons in a high-energy state to a density that is overwhelmingly higher than electrons in a low energy state. This is called a "Population Inversion State".
In other words, by having the amount of naturally emitted light exceed the absorbed light, it became possible to effectively create a laser beam for the first time.

Electrons in a Population Inversion State

In a population inversion state, when a single electron naturally emits light, that light will cause a different electron to naturally emit light. This will produce a chain reaction that increases the amount of light and creates a strong beam. This is how laser oscillation works.

Electrons in a Population Inversion State

All laser oscillation tubes are comprised of the following three elements: 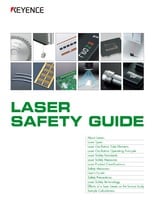 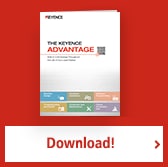